This drawning study depicts an early morning departure of the ship Diligence. Built and so named in Whitby by G & N Langbourne in 1774. This 295 ton ship manned by 80 seamen was re-named Discovery when purchased by the government to become a consort to Captain Cook\'s Resolution on his third major voyage of exploration. Commanded by Captain Clark she joined up with Resolution off the Cape of Good Hope in an attempt to discover the Northern Passage. Ice curtailed this quest. Like Cook's other ships, Discovery was not specifically built for her role in exploration. This was her last recorded voyage with Captain Cook and little is known about her later years and final resting place. Limited Edition Giclee print of 500 approx 20"x15" 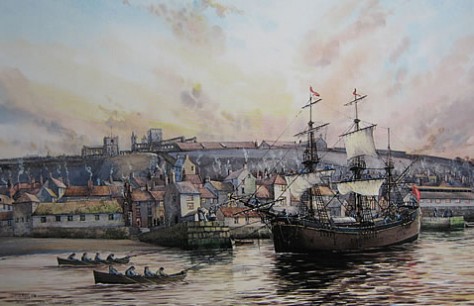