The Birth Of The Endeavour

This study by John Freeman depicts Captain Cook's ship H M Endeavour at berth in Whitby Harbour, North Yorkshire. The original ship was built in Whitby in the 1760’s and named The Earl of Pembroke. When Captain Cook selected her as an ideal ship to explore the unknown southern hemisphere she was bought by the British Admiralty, refitted, armed and re-named “Endeavour”. She served him well but alas, when decommissioned, her final resting place is unknown. The image is based on the exact replica, built in Australia in the 1980’s from the original admiralty plans. Her visits to Whitby – her spiritual home port – were wonderful events, harking back to the days when the ancient harbour would have been full of similar vessels. She is shown here moored in the dock close to where the original was built. The house Captain Cook stayed in as an apprentice is in the background. A Limited Edition Print of only 100 Most of the edition has already been sold. 16" x 11.5" 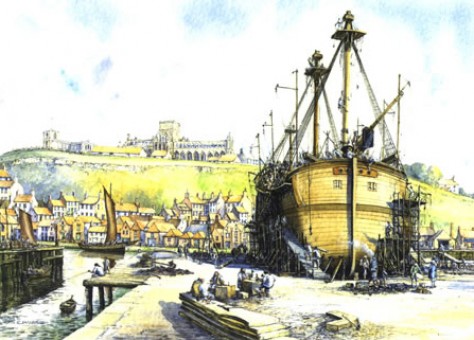