Whitby harbour has long been a vital refuge for sailors travelling along England`s North Eastern coastline. As far back as the  1500`s it was mentioned as being in dire need of repair!

The River Esk empties into the North Sea through the harbour mouth, which has the dubious distinction of facing due North. Not so good when leaving the refuge of the harbour.

From the sea the Abbey perched high on the cliffs would have been the first indication that the harbour was near. In the   1830`s and 40`s the two lighthouses were erected, the West pier lighthouse being a much grander affair than its diminutive sister on the East pier.

Further protection to the harbour was added in the early 1900`s with the building of the two concrete and timber extensions, at the time of writing in need of repair themselves due to the relentless pounding of the North Sea.

This study by John Freeman depicts one of Whitby`s fishing boats heading towards the harbour in what can only be described as “fresh” conditions! 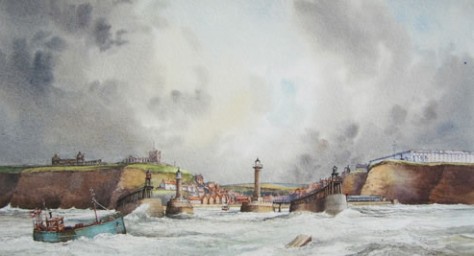