The Replica Bark H.M. Endeavour approaching Whitby Harbour in May 1997. The lovingly created replica of Captain Cook's most famous ship was built in Australia and launched in December 1993. Depicted here on what must be the most emotional part of her 1997 world tour, her visit to Whitby, where her predecessor left in 1768, a Whitby-built collier, the \'Earl Of Pembroke\' prior to her fitting out and subsequent voyages as H.M. Endeavour under Captain James Cook R.N. 14" x 10" signed print 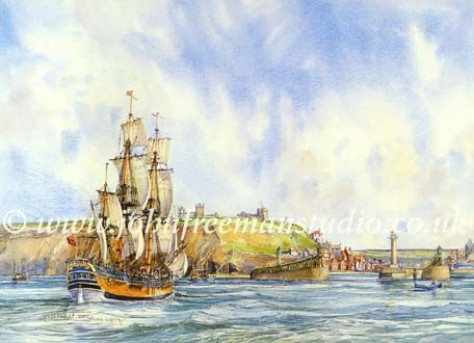