Grosmont came into railway being with the development of local iron ore mining in the early 1800`s. The first horse drawn railway connecting Whitby with Pickering was opened in 1836. Designed and developed by George Stephenson essentially as a goods line. The six mile stretch between Grosmont and Whitby transported both iron ore and whinstone (a hard stone used for such buildings as Somerset House) to Whitby for onward shipping by sea.

The line was converted to steam in 1846 using specially designed “Whitby Bogies” to cope with the tight curves on the route.

Beechings axe fell on the line in 1965 following a long hard fight against the decision. In 1973 the same band of dedicated, hardworking enthusiasts created the North Yorkshire Moors Railway. This beautiful 18 mile stretch of track between Pickering and its Northern terminus Grosmont is now a great success, carrying around 300 000 passengers annually.

This image depicts one of the N.Y.M.R. engines emerging from the tunnel crossing the road as it approaches the platform at Grosmont. 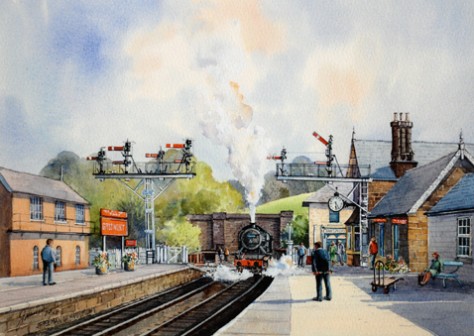