Both these orders were originally formed to defend, help and support the pilgrims on the Crusades who were travelling to and from Jerusalem. In reality, the Templars were a fighting force taking military action against the forces of Islam, and the Hospitallers cared for sick and injured pilgrims in Jerusalem. For these "warrior monks", a seeming contradiction in terms, it was not considered a sin to kill an infidel. It was seen rather as a favour to God in helping to reclaim Jerusalem for the followers of Christ. Both groups followed the same basic rules as the monks in the monastaries of the time, such as poverty, chastity and obedience but the nature of the work they were doing excused them from some of the stricter prayer reigimes. The Templars inclined to the rule of St. Benedict and the Hospitallers followed the Augustinian rule. Rents from lands held by them throughout Europe helped to fund the activities of the knights in the Holy Land. The two works by John Freeman used to illustrate display boards at Ravenscar near Robin Hood's Bay and the links to the knights. 7" x 10" Giclee prints Actual prints are titled and signed by the artist 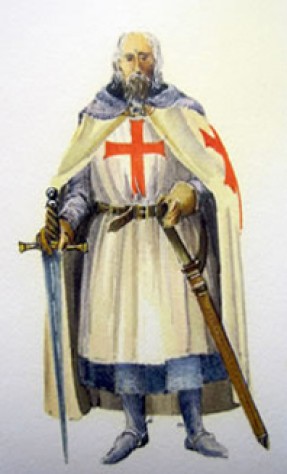