This is John Freeman’s second painting on this historic event, a legendary lifeboat action which took place in January 1881.

In a particularly bad winter period of gales, driving sleet and snow, the brig “Visitor” got into difficulties off Robin Hood’s Bay.  The crew took to the ship’s longboats as she floundered.

The Robin Hood’s Bay lifeboat was in an unseaworthy state and was not be able to assist the shipwrecked men.  The ‘Bay men telegraphed the Whitby lifeboat – the Whitby crew doubted the possibility of rowing six miles to Robin Hood’s Bay and then effecting a rescue – so bad were the conditions at sea. 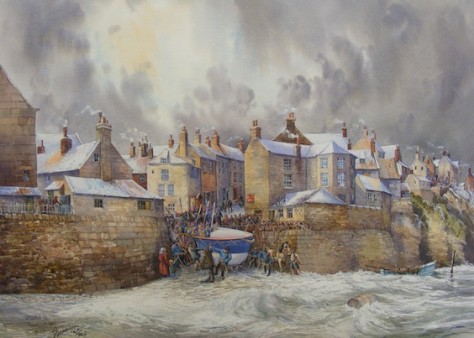