A small inlet along a run of massive cliffs allowed this small fishing community to exist. It would seem that life was usually pretty harsh for residents of the village, early times would have seen very poor road links and most movement would probably have been at the whim of  the north sea.

Dame Laura Knight gathered the Staithes group of painters around her to paint and enjoy the life in this rugged fishing village at the turn of the century. Enjoyment palled as the grim realities of life and death for a small fishing community became apparent.

This study depicts the village, “Steers” in the local dialect, in a more tranquil mood, circa 1900.

Warm light from the windows and the lifeboat house contrast with the cool moonlight reflected in the beck. 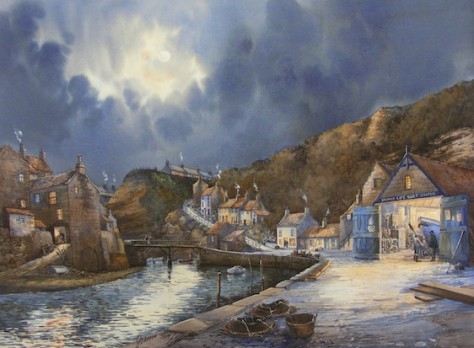