An evocative study harking back to the hey day of Whitby's fishing fleet. Set at no precise date it depicts some of Whitby's landmarks, now no longer part of the townscape. The old Boots corner on the end of the bridge and St Michael's Church on the East Side being two notable features. A salmon boat is rowing towards the swing bridge, why is he slipping so quietly out of the harbour? A late night landing is being hauled up to the fish quay, the boat's deck gleaming with an assorted catch. Herrings aplenty being hauled from below, large Cod etc. put to one side for sorting and putting onto ice. The vessel depicts one of many working the North East coast from Scotland to the Humber, much of the boats detail is based on a North Shields boat “Celerity” built in 1933. I am indebted to Gloria Wilson's book "An Eye On The Coast" for the invaluable information regarding the fishing boat. Visitors to Whitby can still catch glimpses of this industry – it hasn't died but it certainly doesn't dominate the harbour as it once did. Signed Giclee` Print approx 14"x10" 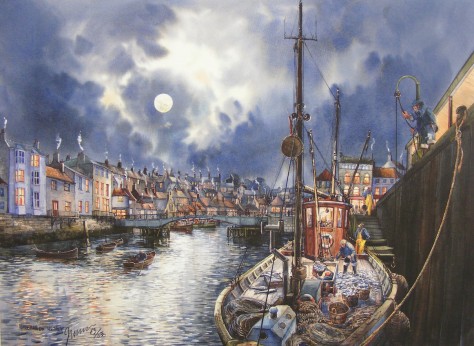