The subject of this image is a beautiful Esk Valley pack bridge with an equally romantic legend to go with it.  A stone in the bridge inscribed T.F. 1619 gives a clue to its story.

Thomas Ferries was a beggar, son of a moorland sheep farmer.  He met and fell in love with Agnes Richardson, her father a wealthy Glaisdale land owner.  He refused to allow them to marry but did agree to the proposition that if Thomas returned from his planned trip to sea a rich man the marriage could go ahead.  Thomas went to sea, came under the influence of Sir Francis Drake and made his fortune in the Caribbean, probably through piracy.  He returned to London in 1592 in a captured ship, sold it and returned to Glaisdale where Agnes’s father consented to their marriage.

But why the bridge?  Legend has it that the night before he set sail he went to visit Agnes to bid her farewell.  The River Esk was in spate and he was unable  to cross to see her.  As a rich man, and by then Lord Mayor of Hull, he vowed no other lovers should be kept apart by the river and thus Beggar’s Bridge was built. Signed Giclee` print approx 14"x10" 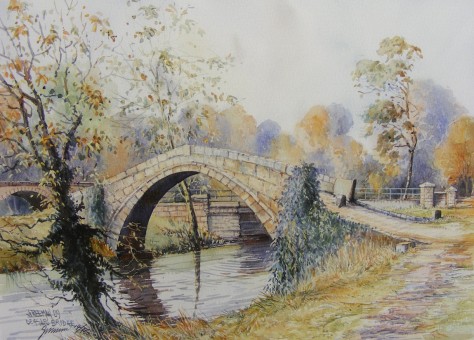