Without a doubt the whalebone arch on Whitby West cliff must be today one of Whitby’s most photographed sites. It would seem that the original bones were erected about 1853, replaced in 1963 from Norway and again in 2003 as a gift from Alaska

The bones are there as a symbol of the whaling industry in Whitby, in its early days a very dangerous venture for the towns fishermen.

The first ship set out to catch whales in 1753 and by the late 1700 ’s it was a major industry with all the malodorous processing taking place just up river from the town.

History moves on, the last ships returned empty in 1837 and today we look on the killing of these creatures as totally unnecessary. But then was then and now is now and the bones depicted in this painting stand as a testament to the bravery of our forefathers.

This work uses the whalebones as the setting for another stunning entry in John Freeman’s nocturne series of watercolours. 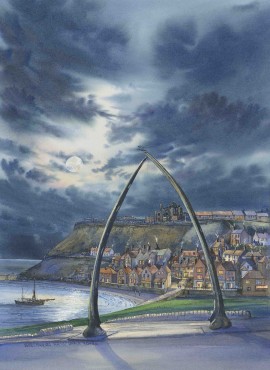