1997 saw two visits of the replica Bark H.M. Endeavour to Whitby. The first spectacular arrival in May and a second longer refit stay, at the end of her U.K. tour. Since her first arrival, the artist, John Freeman has created many studies of this beautiful Australian built ship, a fine replica of Captain James Cook’s most famous ship. In this study he has captured the serenity of this lovely ships as she lay at her moorings in Whitby harbour only yards from the site of the shipyard where the original Endeavour was built. John Freeman visited Whitby’s Dock End on many tranquil nights and stood quietly taking in the serene sight of those tall masts and spars reflecting light from a high bright moon. The Abbey and Parish Church bathed in moonlight whilst street lights reveal glimpses of the famous Whitby roof-tops. Warm lights glow from Capt. Cooks house across the harbour where a young James Cook studied, prior to his epic voyages.  Signed Print approx 14"x10" 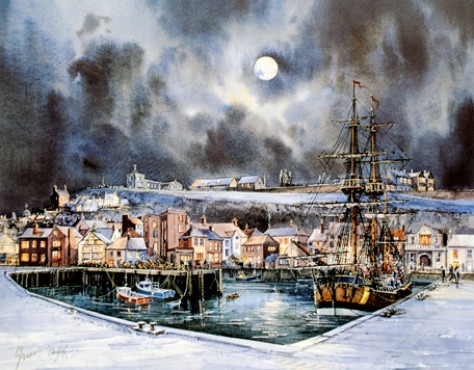