Painted and published in 2006 this is the latest in a spectacular series of nocturne studies by John Freeman depicting the village of Robin Hood's Bay. The vantage point is the top of \"Bay Bank\" looking down into the village. A hotch potch of roofs and chimney pots give an idea of the maze of cobbled streets and alleyways that were the legendary haunt of smugglers avoiding the revenue men! Sea captains\' houses huddle close to fishermen\'s cottages, chapels and pubs overlook the tiny streets. Kings Beck races through the lower village, spilling into the sea at Way Foot where the fishing cobles are hauled up. Across the bay is the towering headland of Ravenscar. Originally the site of a Roman signal station, it bears silent witness to many a wreck washed up at its foot. John Freeman has made a timeless and evocative study of this much loved Yorkshire village. 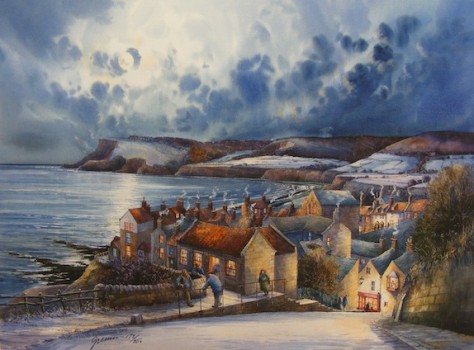