An exclusive limited edition print of 500 Size: 13" x 21" This watercolour by John Freeman is not a Gothic painting but a painting for goths - based on the architecture and events in Whitby in 1885 which gave birth to a Gothic legend.

Bram Stoker, the Irish author, was a summer visitor to the town. Stoker may have witnessed the ship wreck of the Dmitry in October 1885, or more probably seen a Sutcliffe photograph of the scene. The Whitby Gazette of October 24, 1885 records: “The Russian schooner Dmitri of Navra, with silver sand, came in suddenly, in heavy weather, but going ashore in “ Collier's Hope” became a total wreck”

Frank Meadow Sutcliffe photographed this wreck, positioned in the view of Whitby which Bram Stoker much admired. Stoker wrote:"The houses of the old town, the side away from us, are all red roofed and seem piled one over the other anyhow. Right over the town is the ruin of Whitby Abbey."Tate Hill or Collier's Hope, with the East side fishermens' houses nestling under the church, graveyard and ruined Abbey has inspired writers and painters for generations. It would seem that the Transylvanian horror story, then forming in Stoker's mind, connected with the Russian schooner Dmitry of Navra - to become Demeter of Varna! Thus, various images, events and fantasies became woven together to form Whitby's connection to the most famous of Gothic novels.

N.B. No one laid claim to owning the black dog! Viewers have seen up to 4 dogs roaming the sky in this evocative painting...not deliberately created by the artist, can you see any?  Signed Giclee` Print approx 21"x13" 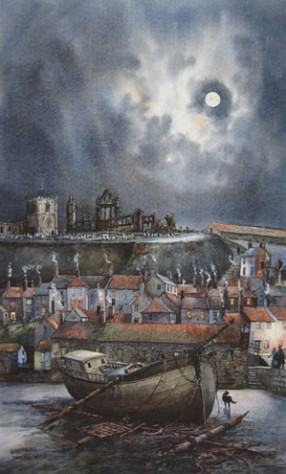 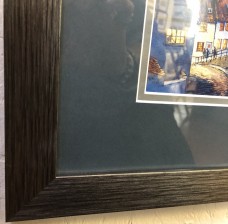