Church Street runs parallel to the River Esk on its east bank. It is Whitby`s longest street, stretching from the Abbey steps right down to Spital Bridge. This southern end suffered radical changes in the post war period but the Northern end, depicted here, remains remarkably intact.

This end of Church Street is a charming collection of shops, inns and cottages. Shops that once sold the necessities of life to the East Side`s fishing community have given way to a wide array of gift shops catering to Whitby`s many visitors.

Over the street`s long life it must have witnessed a fascinating stream of humanity making its way to the foot of the 199 steps leading to the Abbey and Church of St Mary, on the cliff above.

The pillared Town Hall, built in 1788 stands at the top of the market place, its classical style, contrasting with domestic architecture surrounding it.

John Freeman`s image captures the light emanating from the host of shop windows, casting warmth onto the cobbles in this timeless study of Church Street.

John Freeman – born in Doncaster in 1942 established his studio in Whitby in 1969. Now well known for his studies of Whitby and its surroundings, he can be found working in his studio, a converted slaughterhouse and butchers shop in the heart of Whitby`s East Side. His watercolours are a fascinating combination of detail and bold washes that catch the eye at a distance and offer a feast of detail for closer enjoyment. His nocturne studies are now a distinctive and highly collectable part of his work. 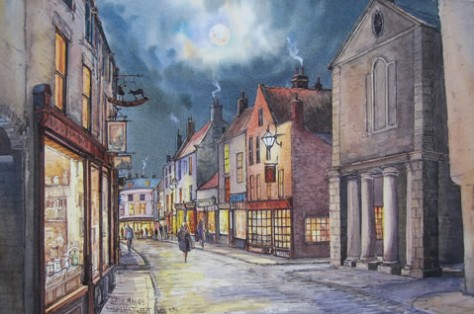